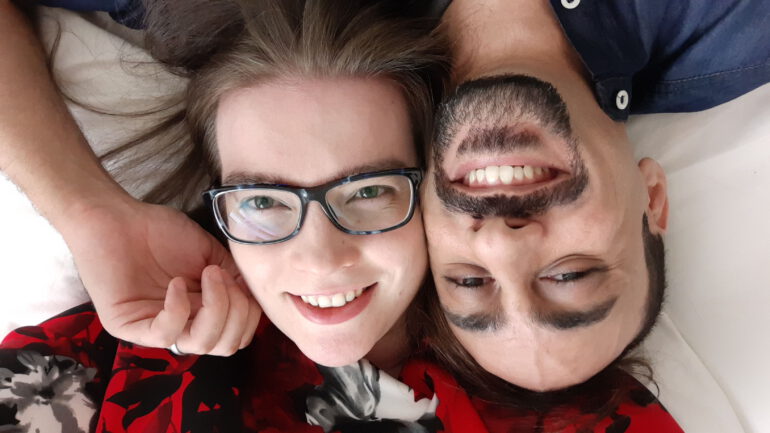 Traditionally I would spend the holidays with my extended family but because of how things were around our marriage I couldn’t do that for our first ever Christmas. Instead, we made it ourselves, in our one-room apartment, with a very low budget and some hand made decorations. And let me tell you, it was incredible!

I started the day with something I had not done before properly, rice porridge. It is one of the traditions here in Finland to have some of this creamy goodness with an almond hidden into it. Whoever gets the almond is supposed to have better luck the coming year (Mr. Vana tried his best to dig through the porridge to cheat at finding the plum but in the end, I managed to get it on my plate in glorious victory). People can also make things such as plum or raisin soup to go with it but I decided against it since neither of us really enjoys such things, cinnamon-sugar all the way for this girl!

The baubles proved to be quite the hassle, I may or may not have lost my temper a few times while I was trying to get them to behave. In the end, I succeeded in wrangling them though and so, we had an amazing Xmas Branch with my heritage star on top (it is the star we used to have back home when the family was still intact and the holidays full of mystery and joy for a child).

After the branch was done it was time to move on to the making of our two-person feast and the final steps of the dessert while Mr. Vana finished up with his work. I locked myself in the bathroom, put on a nice red dress, and prettied myself up with a final touch of clip-on earrings (oh yes, that’s another thing I learned, you don’t actually have to pierce your ears!) and the amazing snowflake necklace my husband got me.

As for the side dishes I whipped up some herbal mushrooms, cold smoked salmon and salmon mousse, as well as a Chantelle salad that we ended up tossing because oh boy I should’ve listened to my gut when I was measuring up the white wine vinegar and it screamed ‘’Don’t do it!”. Let’s bypass that as a momentary lapse in judgment and move right on shall we!

As for the table and setting it well, we are currently living in a very much space-challenged apartment and the pc took its place on our one table at that time that we also used to eat, but I managed to clear ‘’ my side’’ of it. I set our food on it and gave it some mood lightings and made room for the home restaurant plates used.

All and all it was a nice meal, at least we didn’t remain hungry and some of the things we even saved for an evening snack. After dinner, Mr. Vana gifted me the sweetest thing ever, the things he had held on to from our first (online)date. He actually dried the rose he got for me back in Israel so he could give it to me one day, and he wrote me a note back then, roughly six months before. It said ‘’I love you’’. Talk about a romantic, committed to the cause kind of guy eh?