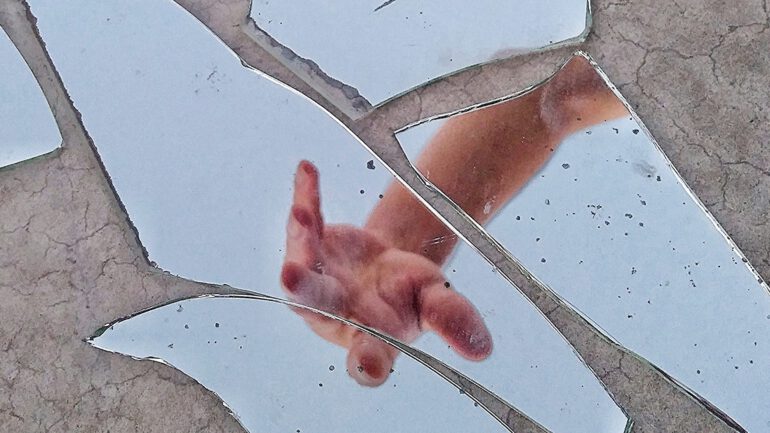 Disclaimer & Trigger warning: The following article touches on topics such as trauma, self-harm, and suicidal tendencies. It is purely based on my own experiences in the realm of psychotic symptoms, and as per the golden rule of any mental disorder, the symptoms vary based on the individual. Not once have I heard of two Borderlines who had the same exact symptoms and experience with their disorder.

She’s cute but a Psycho!

I think this is something we Borderlines might hear a bit too much. Because of our emotional dysregulation and the outbursts that come with it, people will use such terms to try and explain what is happening. While the morality of such talk is questionable at best, there is a hint of truth within it.

A recent trip to the hospital gave me a much-needed wake-up call, and I came to the understanding that I can truly be psychotic. I mean, I had my suspicions from before as I’ve had some black-out level episodes throughout my life, but I never really had to face the facts. And the facts, unfortunately, are that my perceptions in those moments are so distorted that I can not make a sound judgment of reality.

My previous experiences with psychotic episodes were about the knowledge that I’ve had a blackout, hurt myself, and after waking up I deal with the aftermath. Since my recent meltdown I’ve come to ponder: How many mild or even severe psychotic seasons or moments have I gone through without noticing it because nobody did what my husband managed to do and call the bloody medics?

It was true to me.

Every time I succumb to the demons in my mind, things are very real to me. The pain is immense, the fear is paralyzing. The difference between my everyday Borderline episode of being overly emotional and screaming it out, and the psychotic episodes, is that the part of me that likes to keep telling me that it will pass gets drowned out. There is no end. And I believe it to the max.

In those moments my inside whispers are so strong they take over. Whatever the situation was about in my mind will rule over reality. I will fixate on one thing, and one thing only: something bad has happened and there is no way out.

My worst episodes with psychotic symptoms have always been about the core Borderline trait, fear of abandonment/being left alone. They’ve been about believing that someone has died, or about me being dumped and forgotten. The latest one was about me feeling like my husband was abandoning me, which he, unfortunately, escalated as he had to take measures to make sure I will be safe.

When I wake up, I understand but the damage lingers.

As I woke up from the said episode, I understood that my husband had gone out to keep calling the medics, since they were apparently taking their sweet time. This is now very clear to me and I am thankful that he did it, yet, in the moment my reality was very different.

The first time he went out was when I was crying, my heart was broken, I was shattered into a million pieces (not by anything he had done, more because of my own mind reading into his inactions and behavior in a very twisted way) And so when he turned and left, It was a blunt dagger straight through my pitiful existence. And I turned to sharp objects. Why couldn’t he see all I needed was an embrace? Why did he leave when I was literally crying “HELP!”? I can’t take it, please someone, why won’t anyone help me!

He came back soon after. But he had lied. He had said he was only going to be gone for a few minutes. He took too long. I hurt myself. I was angry, I was betrayed and abandoned. And here he is, smiling at me as nothing happened. I screamed and cried. He walked out again and I got abandoned again. Another hole punctured into my already fragile stem. This time I started bashing my head into the wall. I wanted the pain to end. I wanted it all to end.

At some point, he came back again. I remember him, and I remember telling him that he is not really there. I kept hitting my forehead to the wall. I couldn’t cope anymore. I had been abandoned. Multiple times in a row. Every time I was happy he came back, every time I got crushed when he left. And then he left once more.

They called my name.

I got out, a whimpering mess not knowing what to do. I had sent out messages to my mother and to my husband. I was going to go away. Where? I didn’t know. I just had to go away. The pain had made me blind to everything around me.

I got outside the building and started walking. My husband tried to get in touch with me as he was out there too. I flinched away. He says there were stares from strangers as they tried to figure out what to do, I don’t remember anything but flowers and a statue of two young folks. I needed to get to the flowers.

And then they called my name. Maria! Maria!

I looked to the side and saw the yellow get-up of a paramedic. I kept walking. They kept following. I sat down near the flowers and they sat with me. I burst into tears.

They asked some questions and took me to the hospital to have a chat. I got out with some anti-psychotics and a call time to the nurse later on.

My husband tells me he couldn’t get in touch with me at all and so, he called the ambulance. Our experiences differ greatly, and as I came to I had no reason to doubt his side of it. I understand that I was not in a good place, as he said, the train had left the station and there was nobody home.

Where was I then?

Well, as I tried to explain to him, at moments it felt like I was in the center of a hurricane. I saw the havoc the storm was causing in a blurred, distorted way. Everything got muddied behind a wall of debris and there I was, in the eye of the storm, somewhat safe. It was calm there, I didn’t have to see or feel much of anything.

In other moments it felt like I was flicking in and out of existence. There was a part of me that understood what is happening, urging me to calm down and stop. It kept telling me to look at my husband, my husband is trying so hard to help. He loves me and is in pain too. But that part got drowned by the storm very shortly after it tried to get heard.

Mainly it felt like a major dissociation. Just detach from the reality that is so painful. Girl, you don’t gotta cope with this shit, let something else take over and you just sit there on the back seat. I’ll close your eyes and ears, so you don’t have to do anything but hide. And hide I did.

I’ve come to the conclusion that my lack of taking care of myself and keeping up with the regime, as well as the stress and fear I’ve been riling up to for the past 7 days before the meltdown sequence, were the main reasons for the psychotic episode. Prolonged stress seems to be a common factor in Borderline psychotic symptoms starting to appear, and so the aspect of relaxation should be taken more seriously.

In essence, This girl needs to chill!

And while the wake-up call was very brutal, I’m glad it happened. For the first time in my life, someone cared enough to go through with the storm, hold my hand, and call for help. I am thankful for my husband for taking the steps he took. Because of him, I did not do anything irreversible in my haze, and returned home safely! After a long period of time of not feeling like I matter, I woke up to understand that maybe, just maybe, there is someone on this planet that I could place my trust in.

Does stress get you to the brink of losing it completely? Let us know in the comments!